We have been very busy in 2016 and early 2017 so this yearly report is long overdue, but we are glad we can report on so many positive things.

Good growth has been visible all over the MariaDB ecosystem, and the mariadb.org website had almost 1.9 million page views in 2016, a growth of 72% since 2015. We can conclude that 2016 was a successful year for MariaDB.

In 2016 there were 7 releases of the 5.5 series, 5 releases of the 10.0 series and 10 releases of the 10.1 series. The 10.2 series was in the works but not yet announced for general availability during 2016. In addition, there were also multiple releases of MariaDB Galera Cluster, and the C, Java and ODBC connectors as well as many other MariaDB tools. The announcements for each release can be read on the Mariadb.org blog archives with further details in the Knowledge Base.

Some of the notable new features in the upcoming 10.2 include:

Adoption of MariaDB in other platforms also increased, and MariaDB is now available in just about every development environment and cloud platform out there.

The main event organized by the MariaDB Foundation in the year was the MariaDB Developer Meetup in Amsterdam in October, at the Booking.com offices. It was a success with almost 70 attendees.

In addition there were about a dozen events in 2016 at which MariaDB Foundation staff spoke.

Staff, board and members

Our developers worked a lot on performance and scalability issues, ported the best features from new MySQL releases, improved MariaDB portability for platforms like ARM, AIX, IBM s390 and Power8, fixed security issues and other bugs. A lot of time was also invested in cleaning up the codebase as the current 2.2 million lines of code includes quite a lot of legacy code. Version control and issue tracker statistics show that the foundation staff made 391 commits, reported 371 bugs or issues and closed 280 bugs or other issues.

In total there were 2396 commits made by 72 contributors in 2016. The commit statistics were extracted from the 10.2 branch history in the MariaDB server repository, and does not include commits made on other branches nor commits made in other repositories (connectors, upstream storage engines and plugins, downstream packaging repositories etc). The total amount of MDEV issues opened in 2016 was 2335 and issues closed 1466. 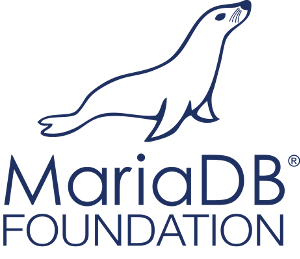 The Board of Directors at the end of 2016 consisted of:

MariaDB Foundation CEO Otto Kekäläinen serves as the secretary of the board.

If you want to help the MariaDB Foundation in its mission to guarantee continuity and open collaboration, please support us with individual or corporate sponsorship.

We expect the steady growth in the adoption of MariaDB to continue in 2017, and for MariaDB 10.2, due to be released as GA soon, to be quickly adopted. MariaDB 10.3, the next major development version, will be released and development is already active in that branch. There is also substantial work being done on many of the plugins and storage engines that MariaDB supports, and more of these are becoming mature tools in their own right.